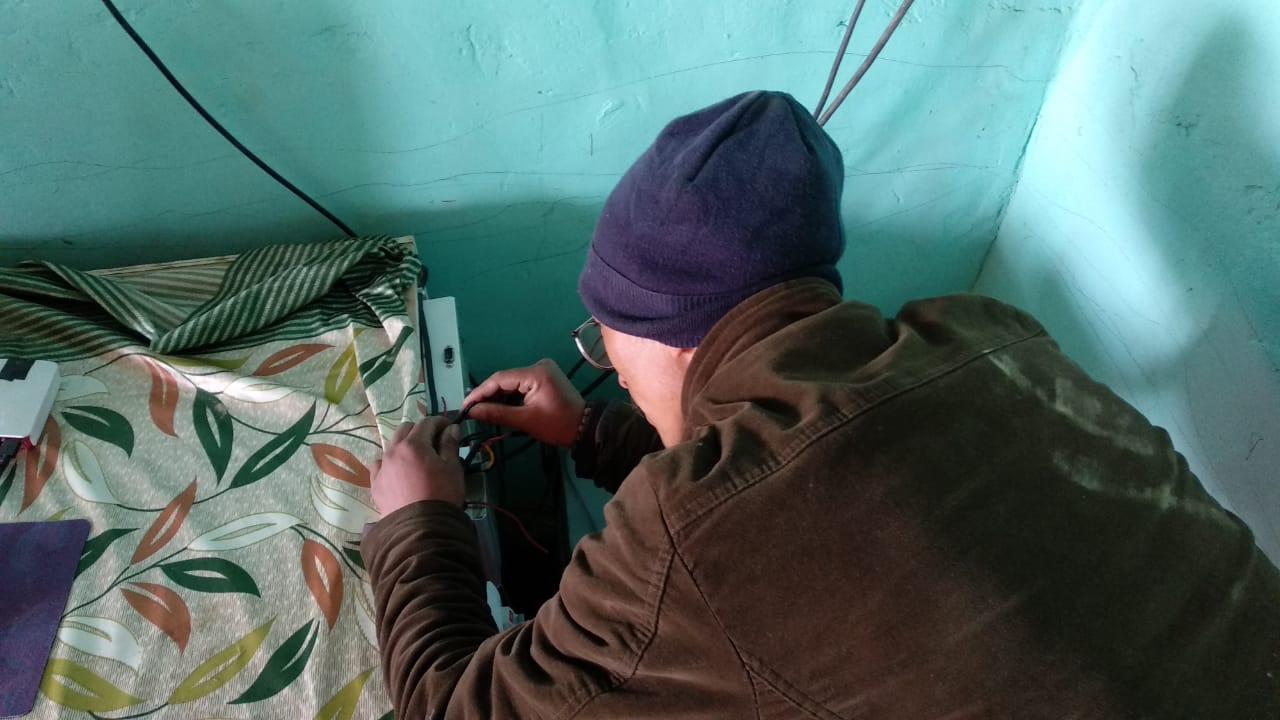 Located deep in the valley of Zanskar in the Indian Himalayas is the centuries-old village called Marling. Only the local natives or true wanderers reach this far into the mountains.  It takes 20 hours by a vehicle on a dirt road followed by a long trek of 6 hours in a valley to reach Marling. In winter, you have to walk on the frozen Zanskar River for miles to get here. The entire village remains cut off from connectivity during this time of the year. There is no active medium for communication. Till 2017, there was no electricity in the village and the community used kerosene lamps for their lighting needs.  It was then that the team from Global Himalayan Expedition (GHE) electrified the village with solar microgrids. During the solar electrification of the village, the team of engineers met the postman of the valley Choejor.

In the remote region of Zanskar, GHE was facing a typical operational problem. The initiative on the mission to electrify remote villages in Zanskar had many logistical constraints. The remoteness of the place brings a lot of challenges. The surveys, project work, and other operations can’t be completed without proper and constant communication. Logistics and transportation are the other big major challenges. This is why community engagement is at the heart of any social initiative and was the missing part of the puzzle for GHE.

Choejor, a resident of Purne village, worked as a postman for the Padum Post Office. It took him three hours of trek to reach his village from Padum. There was no road connectivity until a few years ago. The villagers had to trek or ride a horse for commuting. As part of his job, he used to walk for hours to deliver the posts to the remote villages in Zanskar. What he didn’t realize was that this was going to be his biggest strength for the years to come.

GHE team met Choejor at the Marling village and saw a young man with strong foundations who was eager to do something more for his region. As a young Ladakhi boy, he always wanted to do something for his village. He had the inclination for social work and having spent time in Leh and Zanskar, he knew the value of the development. When the opportunity arrived, he grabbed it with both hands.

His work with GHE was to find the villages with no energy access. The role was to find accurate information about the Zanskar region. Information gathering is very crucial at such places so that no detail is missed out. Accuracy plays a critical role in setting the correct course of action. Inadequate information can lead to a disaster in terms of execution. A good survey is a job half done for social initiatives.

Based on the survey reports, GHE gathered the resources and started the electrification of the villages. Choejor played a key role in the communication and mobilization of the villagers. The material had to be carried by horses or villagers to certain distances. It was very crucial that the GHE team and villagers met at the same time and the same place. This engagement is the backbone of the execution of projects at high altitude areas. Choejor not only provided the information but also lead the teams to the villages.

Another challenge was to find a technical person for the maintenance of the grids installed. The team arrived with the engineers at the time of the execution, but it was not easy to send a resource for the maintenance of grids. It required a lot of time and financial resources. As they say, the worst of times also presents the best of opportunities.

Choejor expressed his interest in being trained as a Solar Engineer and was then, trained by GHE’s chief engineer; Shakeer. He was also sent on official projects to get hands-on experience. A curious bent of mind and a strong learning attitude helped him grasp the nitty-gritty of the work quickly. He had positioned himself as a true leader of the community, who not only helped them gaining energy access but also opened the doors of new possibilities for the youth. He has actively supported the installation of solar grids in more than 30 villages of Zanskar and Leh.

To enable income generation for the communities, he has also identified and set up homestays at different locations in the valley. Tourism can play a vital role in income generation and sustainability of the tribes. Travelers looking for an authentic experience visit these homestays and stay with the communities. Zanskar is one of the most beautiful valleys of the world, which is untouched by human activities and is truly heaven to all the responsible travelers.

Choejor is a full-time entrepreneur now and has set up a service center in Padum. He takes care of the supply and maintenance of the solar grids in the villages of Zanskar. He has installed hundreds of LED bulbs until now. When darkness arises, the bulbs glow on both sides of the Zanskar River. If you happen to visit Phugtal, Yougar, Purne, or Marling, ask for the postman who distributed the light bulbs, and you will hear more stories about him