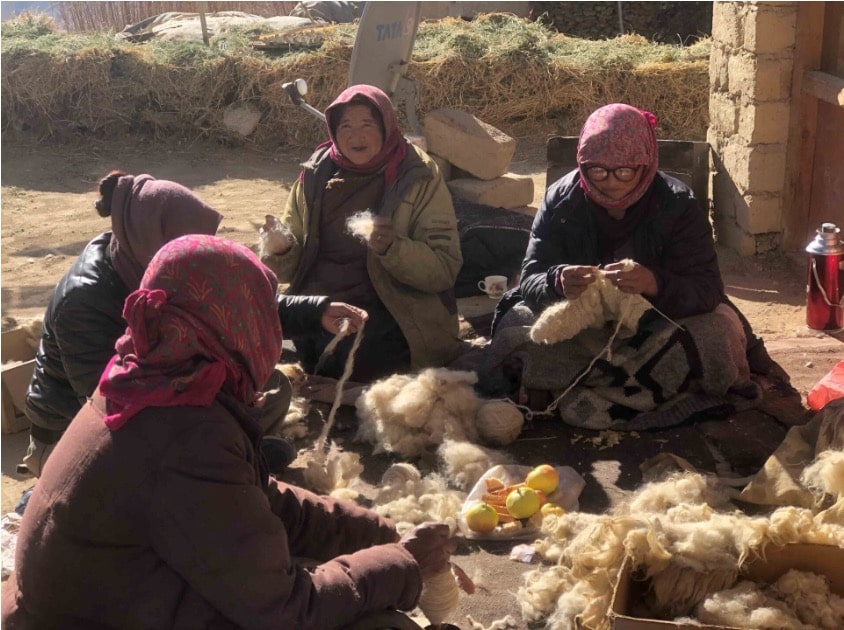 Ladakh in winter is all about the daunting trails, snow-coated mountain peaks, rustic maple leaves adorning the streets, and frozen lakes creating an endless streak of dreamlike frames.

Nothing gives a high as intense as high mountain passes – this is the exact meaning of Ladakh in Tibetan! Explore the 5 hidden treasures of Ladakh which you can explore in the winter.

Hear the stories of the origin of Pashmina in these highlands, learn the art of weaving this exquisite, world-famous textile with the local women, and spend a few days with the doughty Changpas, who often share amazing tales of their travels through some of the most staggeringly beautiful, yet largely inaccessible regions of Ladakh.

Travel with Mountain Homestays to encounter this rare, remarkable world of the Changpas that you won’t find anywhere else in the 21st century.

Spituk Gustor, Matho Nagrang, Chemday Wangchok and Galdan Namchot are some of the unique, traditional festivals held every winter in Ladakh. The word Gustor means sacrifice in Ladakh, and the Gustor festival is held at various monasteries across the region. The festival is commemorated by a mask dance by the lamas (priests) signifying Dharmapalas or the guardians of divinities of the Buddhist pantheon.

With Mountain Homestays, watch the hidden valleys of Ladakh come alive during the peak winters with festive colours, tastes and sounds.

Ice hockey, also called shinny or pond hockey is a much celebrated sport in the region. The sport is played between the months of November and January on the frozen lakes and ponds that double up as natural ice rinks. Ladakh is home to several national-level players and the sport is very popular in the region.

Next winter, take a shot at playing ice hockey on the frozen Pangong Lake, with Mountain Homestays.

Snow Leopards, unlike the other big cats like tigers, lions and common leopards, cannot roar. Spot the Snow Leopard on your next visit to the region at Hemis National Park, Ulley Valley, Nubra Valley or Rong Valley with professional spotters, who have made it much easier to see these beautiful yet elusive creatures against the white, snowy backdrop in the winters.

Nubra is home to several glaciers. Located at 11,000ft above sea level, the valley becomes the perfect spot for ice climbing in winter. Each year, the locals host a 3-day long Ice Climbing Festival, where they hold workshops in the villages of Ayee and Warshi, the last settlement en route to the Siachen Glacier.

Experience the thrill and learn the skill of ice climbing with Mountain Homestays in the frigid winters between the months of December and February with seasoned ice climbers in the Nubra Valley.