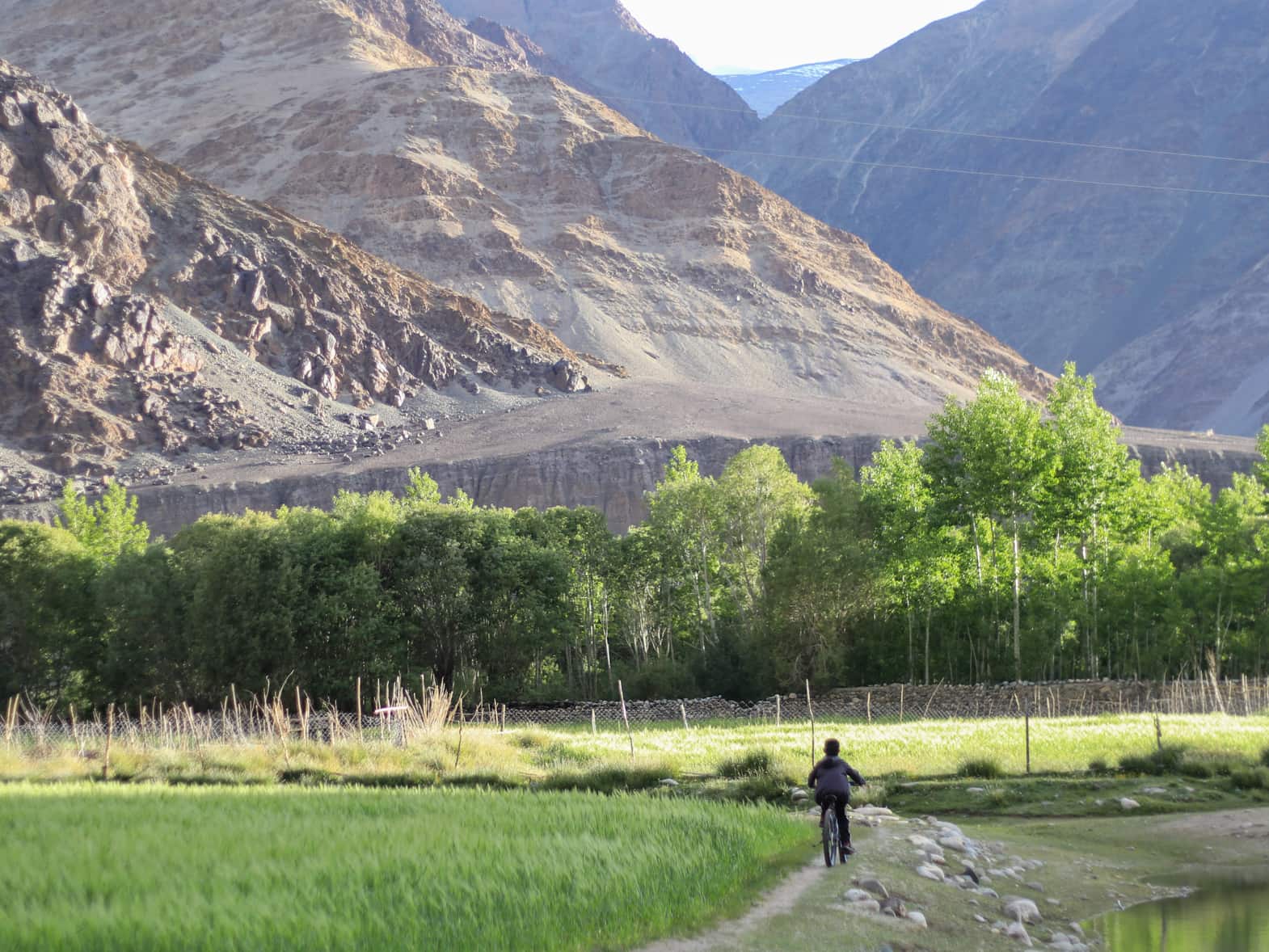 What if we woke up one morning, brushed our teeth, made a cup of tea, and clean forgot what the words sustainable, responsible, eco or regenerative mean? What if we just got on with our lives, and reacted instinctively to every risk and opportunity like we did when we were two or three years old? What if we responded to complexity with simplicity? Confusion with curiosity? And took the next big leap of faith in tourism, without knowing if we’d fall flat on our face or fly?

On a two-week trip this summer to meet and take the time to truly listen to families who are happy to host travellers in rural Ladakh — also known as “community engagement”, “outreach”, “skill development” or “homestay training” in Tourismspeak — I felt absolutely sure we could fly.

After two years of uncertainty and incessant nail-biting, the bright blue skies of Ladakh, kohled with caramel-coloured mountains, suddenly seemed open to exciting new possibilities. The post-vaccine energy, the laughter in the air, felt refreshing and reassuringly familiar. Perhaps, we were finally turning the corner on Covid-19. Perhaps, the winter of discontent was finally coming to a warm, fuzzy, hope-inducing end…

Deeply aware of the risks of living with unpredictable viruses, and our own responsibilities towards our local partners, as we drove deep into areas where medical care was limited or non-existent, we knew we were walking on egg shells. But as more and more “revenge tourists” — who were making up for lost time by taking more holidays after the lockdowns — started streaming into Leh, breaking all records and fanning out into newer areas, where homestay hosts were entirely unprepared for the rush, we knew we had to get there before they did. As long as we had the support of the local councilors and the consent of the communities, and all the Covid protocols in place, we had our task cut out. Fear was an asset, not a liability!

Travelling with the entire team at GHE for the first time, I realised early on in the trip that each of us was carrying our own invisible Lego blocks in our heads. We all wanted to build something — a) enduring relationships with our local partners in the villages; b) more inspiring, micro-regional, carbon-free experiences for future travellers; c) more lasting impact on remote, “no man’s lands” on the maps; d) and deeper bonds with our own colleagues at GHE and Mountain Homestays, since we were spending so much time together after a long, pandemicked pause.

Red, yellow, blue, green, our building blocks were many, and they often came together, quite magically, when we least expected them to. In this irreverent, fun Lego Land of ours, we — the team, our Ladakhi partners, homestay hosts, local youth and even the drivers who drove us from one end of this trans-Himalayan wonderland to another — quickly went from working solo to working together, following leaders to becoming leaders, and sharing moderate ambitions to sharing dreams. The collective momentum was electric.

Although there were several things we wanted to accomplish as a team, I was particularly looking forward to meeting our homestay partners to talk to them about their hopes and aspirations, their fears and apprehensions. I was visiting some of these areas in rural Ladakh for the very first time, and was keen on seeing the impact I had only seen in photographs and videos so far.

The idea was to travel, meet and exchange knowledge with the hosts and guides in early summer, and do it once again before the temperatures started to dip again, taking stock of what worked and what didn’t. With an upswing in domestic tourism, and Ladakh showing up as a favourite on several polls, it was critical for those who work in that landscape to prepare for this change together with the partner communities, and to ‘keep talking’ (and as it turned out, set the personal messaging apps on fire!).

With pockets in Ladakh already ravaged by overtourism — fragile landscapes trampled upon and relationships between neighbours affected beyond repair — we knew a lot could go wrong. But if the communities knew what they wanted and agreed to stick to a plan, this surge in interest could be an opportunity, not a threat. What if villages that didn’t get any benefits from tourism until now managed to attract responsible travellers, who value what they have to offer? What if we could make all the homestays carbon-neutral and reduce the pressure on the resources, even before the travellers arrived? What if we could co-curate experiences for the winter too, stretching the tourism season and the rupee all year round? What if we could inspire the young girls and boys who came back home from colleges in Leh during the lockdown to build on their personal interests and become entrepreneurs and guides in their own villages? What if we could bridge the urban-rural gap more meaningfully?

What if we could actively turn all these ‘what ifs’ into enduring realities?

Rolling Up Our Sleeves

I decided to spend a few intensive days across two very different clusters of villages — in the Chumathang region in the south and the Siachen belt in the north. I wanted to understand their capabilities and peculiarities, and find a way to celebrate and support both in the long run. Our primary goal was to offer basic information and tools to the homestay hosts and local guides, many of whom were proficient homemakers, farmers, carpenters, teachers, and so on, but were still taking baby steps in the space of tourism.

We addressed the smallest of their concerns inside the training halls and often, outside it too — in tailoring shops, at hot springs, by rivulets, at local restaurants, monasteries, religious gatherings, SHG centres, markets, and of course, in several kitchens and dining rooms as well. Once the initial shyness and hesitation evaporated, we ended up having wonderful, freewheeling conversations with them about ‘The Future’, over endless cups of solja or tea, wondering (without adding to their troubles) what they could do for tourism and what tourism could do for them.

In my own journey as a travel writer and mediator of planet- and people-friendly tourism, I’m used to encountering surprises at every bend (though I don’t take them for granted). Usually, the further I stray from the city limits, the more surprises I stumble upon. And so it was in Ladakh too. I watched only with mild bemusement at first, when breastfeeding mothers and 72-year-old grandmothers, monks in maroon robes and war veterans with straight backs and short haircuts, showed up for the homestay training sessions. Nomos (young girls) and nonos (young boys) in faded jeans and chinos walked in too — predictably, with spiked hair and oversized phones in undersized pockets, but entirely without that general teenaged disdain one has come to expect from the younger demographic.

There was a sense of unity between villages in the same valley too, a commitment to overcome common challenges. They wanted to grow together. They didn’t want to wait for the next war or proxy war to bring development to their remote villages. They knew tourism could do much the same… bring roads and telecom networks and prosperity without the tanks and artillery in its wake.

Initial misgivings aside — “How can any citywallah truly be interested in churning butter with us at dawn, hike up to see a 1,000-year-old Juniper tree or try a new dry toilet seat?” —  the people in each village also wanted to show the wider world how rich and extraordinary their ‘ordinary’ lives could be. No check dams of language or gender could stall their pride and excitement. They brought along with them their handwoven baskets and felt and wool handicrafts, wore their traditional gonchas, even sang songs, when the time was ripe. The atmosphere was almost festive…

Eager to fold ‘hospital corners’ in bedsheets or plot new hiking trails along the most spectacular of ridges, their spirit was light, and their enthusiasm, infectious. Even their concerns were often more humane than pecuniary — “How can we budget for a cab driver in the overall costs? Surely, we can’t allow him to sleep in the car, or give him food that’s not at par with what we serve our guests?”

Over the two weeks that flew by, I watched gratefully as all our invisible Lego blocks, our ideas, seamlessly fitted into each other’s dreams and plans… Yes, community-based tourism is not without its perils — ask anyone who has been involved in a project for longer than a year — and building trust takes a long, long time. But something about this definitely felt right.

What added to this sense of comfort and confidence, perhaps, was how even the young members of the city-bred team of ours understood that this was a sharing of opportunities, not an unequal exchange. This wasn’t about ‘lending a hand’ or ‘helping out’. Everyone was accountable. Everyone had to have a buy-in. And clearly, young or old, Ladakhi or not, we were all willing to take that next big leap of faith in post-vaccine tourism, not knowing if we’d fall flat on our face or fly.